The Boxcar Children has delighted children for nearly a century now — Gertrude Chandler Warner first penned "The Box-Car Children" in 1924, and it was rewritten for publication for children in 1942. (If you can believe it, the Aldens were original the Cordyces in the original novel, which you can read on Project Gutenberg.) Over her lifetime, Warner penned a further eighteen books in the series, and since, other authors have expanded the series to over 150 titles today.

A classic children's series, both interesting, delightful to read, and of arguable merit, The Boxcar Children has changed quite a bit from the first novel to the last. An obvious one has been the changing of the covers over time. There have been, to my knowledge, three major cover designs throughout the series' history. Here is the first book in the series in its likely original paperback release: 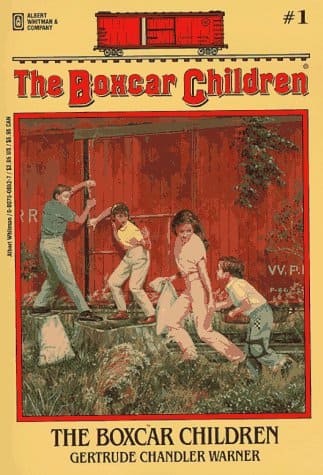 This old cover design was actually used for quite some time. For example: 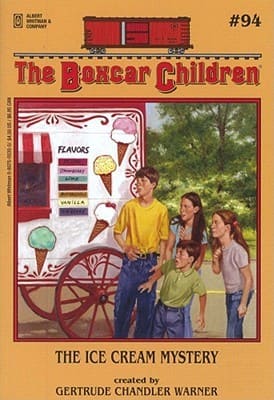 This particular book dates to 2003, fewer than 20 years ago, and it's possible that further books continued to be published with the old cover design. It might seem like a long time, but keep in mind that the 20th Boxcar Children was not published until 1991, eleven years after Warner's death and fifteen years after the 19th book (the last book written by Warner herself) had been published. With over 150 titles today, that means books 20 through 153 (the last 132 books in the series) were all written in the last 19 years, while the first 19 books took Warner 34 years to write (52, if you extend back to the original "Box-Car Children").

This cover design was never widespread, but here's a different one used for the "60th anniversary release", probably in either 1984 or 2002: 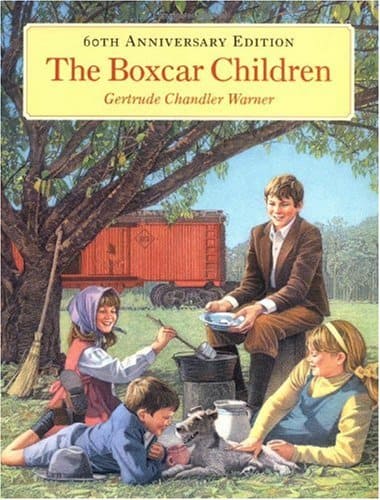 At some point, Albert Whitman (the publisher) came up with a new cover design: 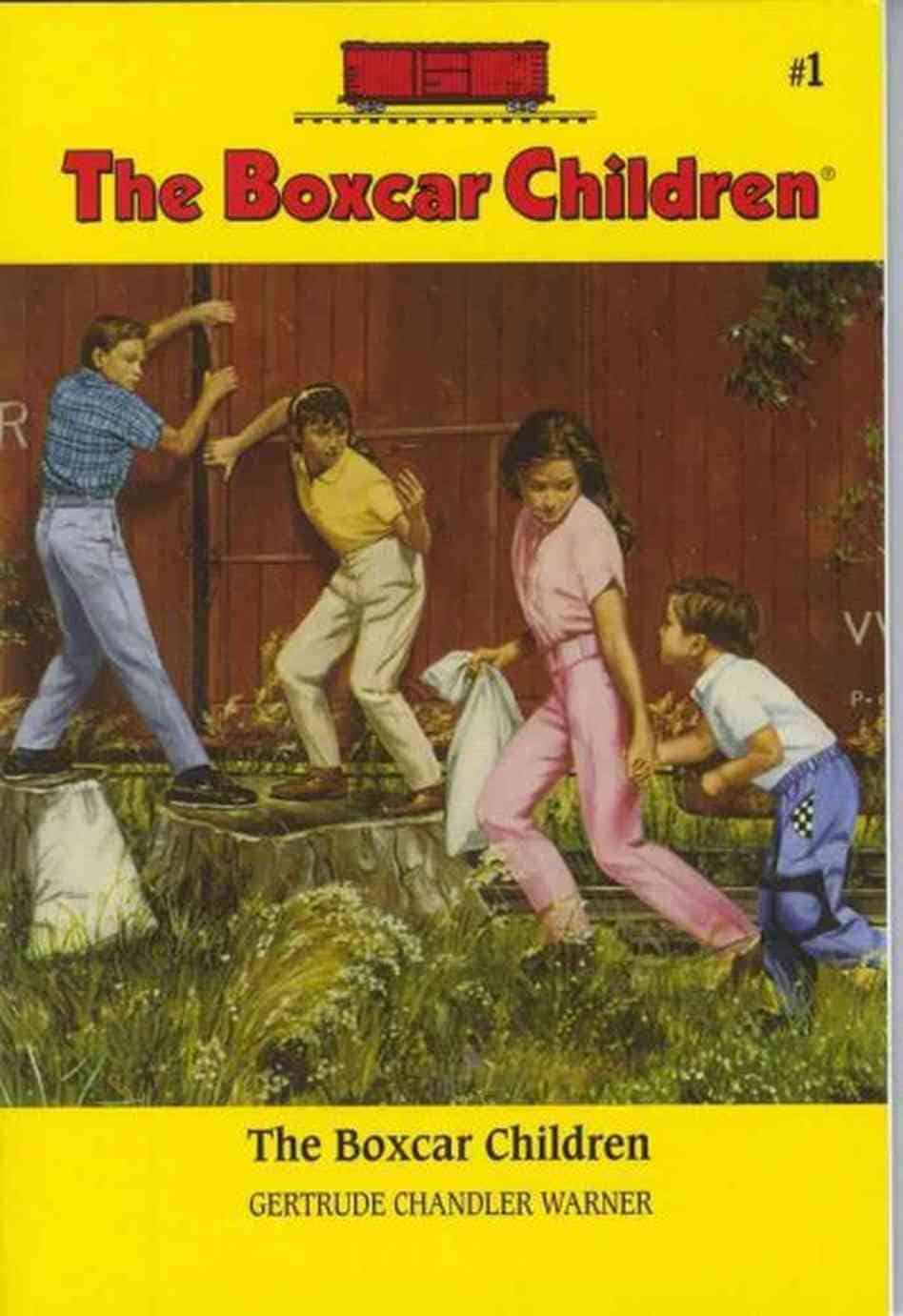 Note that the cover image remained the same. In other words, the cover continued to feature realistic depictions of the children. I can also vouch, from having versions of both the first and second kind, that the illustrations inside are the same. The only difference between the two is the cover is a bit cleaner and simpler; the illustrations do not change.

This cover design continued to be used until likely even more recently: 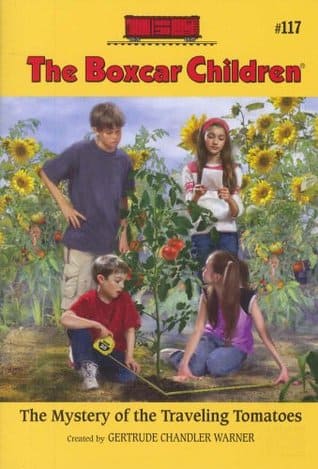 This book dates to 2008, only twelve years ago. Indeed, if you had visited Barnes & Noble as recently as 2010 or 2011, possibly even a couple years later, you would have found that all Boxcar Children books featured this second cover design.

The most recent cover design is arguably the worst: 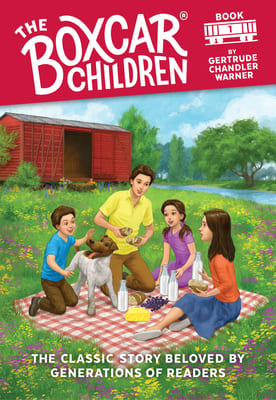 I guess the publishers really want you to feel guitly for reading it if you're older than about the second grade!

For comparison, here are the first three novels featuring the original cover style:

Here's the second of those three novels with the second cover format: 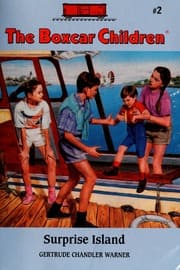 Notice how, once more, the actual illustrations are the same?

Here's the same title, but with a newer cover (slightly different from the one above, but with the same idea): 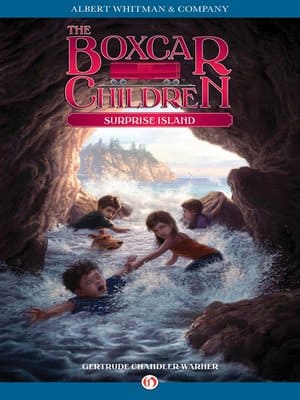 As you can see, compared to the original two paperback cover designs, which featured true-to-life character illustrations on the cover, the covers now feature animated characters. Needless to say, pretty much all of the charm of the cover has been lost. Perhaps this is an effort to align with the equally ridiculous animated characters in the movie: 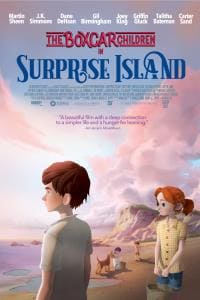 Note that this is with regards to the paperback versions only. The past hardcover books have certainly had varying designs as well: 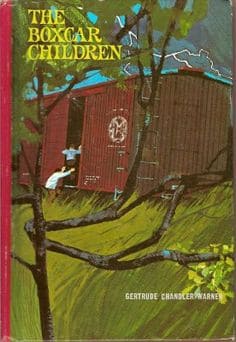 It's not clear what Albert Whitman & Co. was thinking in introducing the new cover which just looks plain silly. With the original and the updated but otherwise unchanged covers, you could really relate to the characters. Now, the silly cartoonish animations just glaringly remind you that these are fictitious works of art, while the cover is anything but a work of art.

Accompanying the change in the covers, which affects all novels in the series purchased new today, has been a decline in the overall quality of the books as well. To put it bluntly, they're just not the same anymore. The original spirit and style of the books has pretty much disappeared, perhaps happening right as the new cover was phased in (I wouldn't be surprised!)

This is illustrated perfectly by (at the time of this writing) the newest title in the series, "The Power Down Mystery". A clear read of the synopsis should jar even the most tolerant Boxcar Children readers:

A bad storm hits Greenfield and leaves behind a mystery. With no power or internet, the Boxcar Children will need to put the pieces together the old-fashioned way. It's been a while since the children have powered down. Can they figure out what's going on while being unplugged?

In the last ten years, the overall style of the writing, as well as the characters themselves, have changed considerably. This is most likely due to an effort on the part of the authors to update the series with more elements of modernity — after all, how many children today have never used a computer and are used to sending telegrams? For better or for worse, quite few.

However, the updating of this series for the sole sake of modernity is objectionable. Part of the charm of this series is the ability to transport you to the golden years of America — right in the heart of the 20th century, when all the original books were set. Anyone looking for a little bit of nostalgia will find plenty of it in the original Boxcar Children books as well as many of the ones that follow. It's something that, by the 153rd book, is completely gone.

Here's a section in particular that caught my eye, straight from pages 13 and 14: 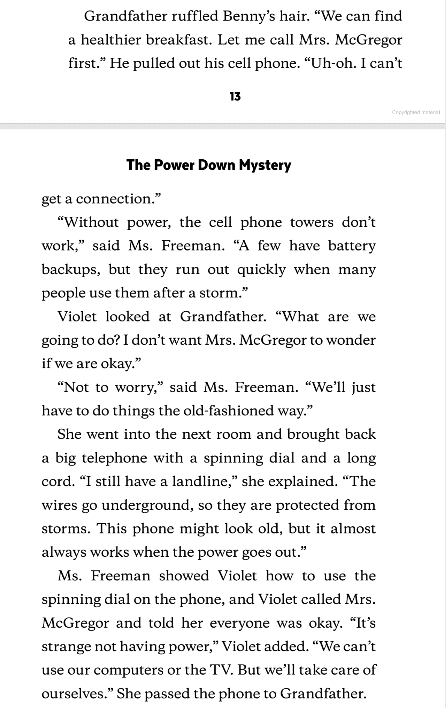 By all means, I applaud the author for sneaking some basic common sense into the storyline and touting the values of landlines to young readers. That gives it a little merit. But that is all that is not objectionable about this.

The real Boxcar Children would never have been in such a ridiculous situation. The republished Boxcar Children was published in 1942, and Surprise Island, the first sequel, was published in 1949. The Yellow House Mystery and and Mystery Ranch followed soon after in 1953 and 1958. In Surprise Island, The Yellow House Mystery, and Mystery Ranch, telephones (not to mention telegrams) feature prominently. Remember that the Bell System did not debut TouchTone telephones until 1962. Until then, all phones with dial service were rotary dial.

Do you really think Violet Alden would need to have been taught how to dial a telephone? Certainly not!

And do you really think Grandfather would have stooped so low as to carry a carcinogenic gadget on him, and put up with such poor-quality service? Certainly not! He had and would still want good phone service, which only landlines can provide.

Rather than being portrayed as the smart, ingenious, resourceful, and skilled kids that Warner created, the Boxcar Children have now been reduced to little more than the common youth — ignorant and viewing anything without batteries or a power cord as a curiosity to marvel at. This is not who the Boxcar Children are. This, now, is the fundamental problem with how the series has changed. They're simply the characters I'm used to reading about.

The Boxcar Children is a series of the 20th century, and it was intended to stay that way. By "updating it for the times", the charm of the series and characters has been completely lost. I don't need to pick up the latest "Boxcar Children" to feel disgusted about how its main characters share striking resemblances to the mobile-addicted brats comprising Generation Z today! I can go and stand around on any city sidewalk to do that.

The telephone example is striking, but the synopsis of this story alone is disgusting. "With no power or internet" "it's been a while since the children have powered down" "can they figure out what's going on while being unplugged?" The real Boxcar Children are way above this. They would never have turned into Internet-addicted zombies that tune everything else out. They are thrilling precisely because of their 20th century charm, valuing and doing everything real and in the moment, with none of the taints of today's society.

Rewriting the Boxcar Children characters to fit with the world that today's youth know is not a good excuse for discarding everything that made the series good. Just because the way the Boxcar Children lived may no longer be prominent today does not mean it is no longer relevant. Simply put, the old read is a good read — the new one is not.

Some elements of modernity as the series progresses are inevitable. The Boxcar Children have used both film cameras and digital cameras. But that's a subtle twist that doesn't completely distort their character or take away from the timeless feel of the series. Obviously "now" things like mobiles, the Internet, and even computers, are best left outside of these classic stories.

If you want a Boxcar Children book with a decent cover, you're going to have to pretty much limit yourself to the used market and hope you can get them all that way. Except, of course, you won't be able to, because the newest books in the series have likely only been released with the newest and most absurd cover. But that's okay, I suppose. The new ones have been so diluted — and stray so far from the original spirit of the series — that they're probably not worth reading anyways.