Digital Music is Killing the Planet

Okay, maybe that's a slight overstatement, but downloading and now streaming of music has only contributed to, rather than mitigated, the effects of the digital consumer world on the environment.

Most people think that going paperless and sticking with electronics means "going green", and most people are wrong. E-waste has exploded exponentially in recent years and the energy required to power all the servers and clients connected to the Internet is stupendously enormous. "Going digital" means exchanging an often one-time environmental cost (the production or duplication of a song) for a continuous burden on the environment that never ceases.

Researchers in Scotland and Norway found that "while we spend less on physical music these days, we're using more energy to listen to it" (CBC): 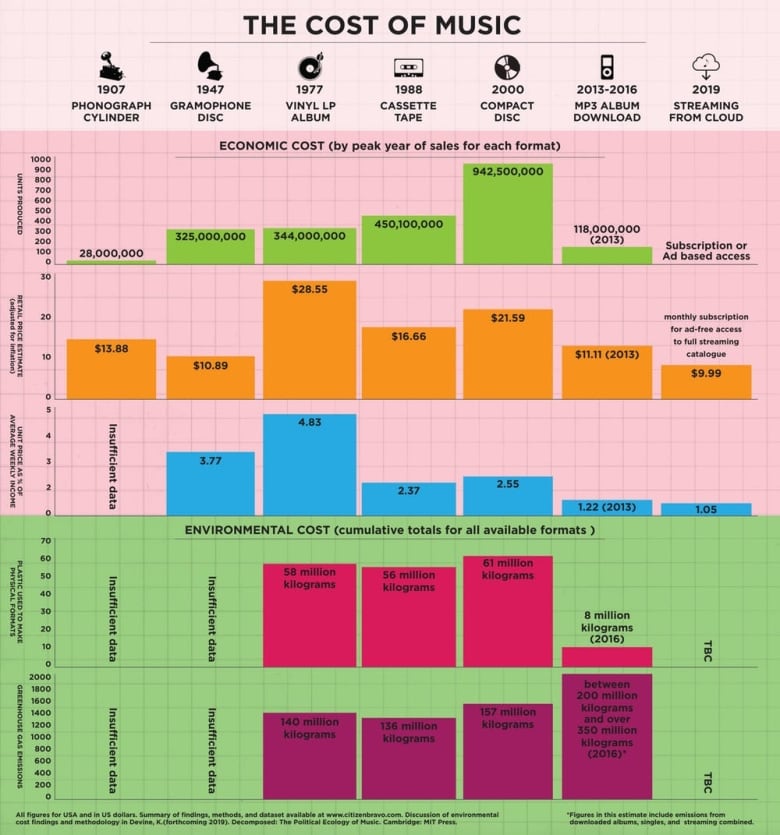 As you can see in the chart above, although the amount of plastic used in the "production" of music has dropped significantly with newer listening methods, actual greenhouse emissions are higher than ever — today, they're a whopping 50 million kilograms more than in 2000, the peak year of CD popularity.

So, the analog audiophiles have had it right all along. Considering that Earth Day was yesterday, why not honor it by cancelling your streaming accounts and "going analog" this year? That's right — close your streaming accounts, ditch your MP3 player, and maybe even bypass that stack of CDs. Pop a cassette into your tape deck or a vinyl record onto the turntable, and Happy Earth Day!

Further reading: Noise pollution: What you need to know about the carbon footprint of streaming music