Somewhere between 40% and 50% of households have a landline today, though the number of true traditional copper POTS lines is somewhere around 20%. (Think you have a "true" landline? You might be in for a nasty surprise.)

Yet, at least in theory, most people have a lot more love for the humble landline than they let on. According to a 2014 Pew Research Poll, "the public felt most secure using landline phones": 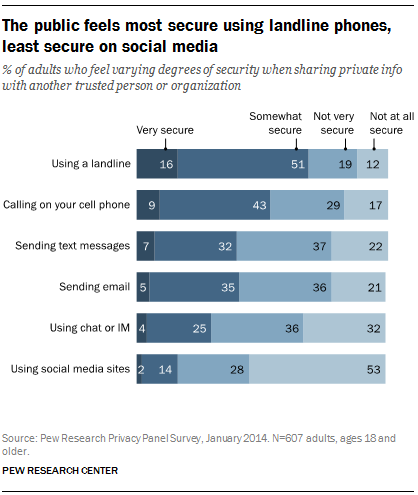 Personally, this is not so much surprising as it is reassuring. Most people know that landlines are the more secure, reliable communications options. In practice, many of them fail to recognize this when they cut the cord. It's only when danger strikes that they begin to regret this.

With the skyrocketing number of wildfires on the move today, this is an eminently practical concern of huge importance to many. In the recent wave of wildfires in California, mobile phones "went silent" as cell towers went down. Search and Rescue actually had to resort to stone age tactics: going house to house on foot!

Those experiences during the widespread fires that claimed more than 70 lives -- as well as during and after hurricanes earlier this year -- reveal a downside to the wireless communications upon which Americans are increasingly dependent: Mobile service falls short of old-fashioned landlines when it comes to surviving catastrophic events. — Bloomberg

Think twice, or thrice, before cutting the cord. Ask yourself: is your life, and your family's, worth more than $20 per month?