The lyrics to Don McLean's 1971 hit "American Pie" (one of the longest hits of all time, at 8:33) contain the memorable line "the day the music died". Surprisingly enough, the day the music died was an actual day in history. Specifically, it was February 3rd, 1959. I won't go into the details much here (there's an entire Wikipedia article about it if you want to read more) but on this day in 1959, three singers were killed in a plane crash in Iowa along with their pilot. The most prominent musician on board was Buddy Holly, perhaps best known for his famous 1957 hit "Peggy Sue". Holly was an inspiration to McLean, who penned the lyrics to memorialize that day (it wasn't known as "the day the music died" until McLean's song). But why was it called "the day the music died"? According to McLean, who symbolizes the "loss of innocence" in rock-and-roll, it was a day of tragedy for the musical world.

I'd like to take McLean's famous lyric and pick it apart here, even refute it. I mean no disrespect whatsoever to Buddy Holly — he's one of my favorite artists from the era, and if you've never listened to "Peggy Sue", you're missing out. But I'd like to point out that music has suffered far more than on that fateful day in 1959. Music has suffered setbacks far more tragic than Buddy Holly's tragic death. It didn't happen in a day though; rather, the signs seem to indicate it happened in a year.

I subtitled this post "What Happened in 1986?" for a good reason. I'd like to know. Yes, the UK and France announced plans to construct the Channel Tunnel (Chunnel) and a spaceship called the Challenger infamously disintegrated, both in that year, among other things. But what else happened?

I've had the suspicion now that 1986 was a year of demise for media, specifically music and movies, though the change is more subtle with the latter. We tend to characterize music by decades, starting with x0 and ending in x9, but that distinction forces us to make a lot of generalizations. The 1980s are no exception. Interestingly enough, if you know a hit from the '80s, chances are it was releaed in the first part of the decade, between 1980 and 1986, inclusive. Coincidence? I think not.

A few months ago, I burned a few CDs. 4 to be exact. It had been a while since I had refreshed my "music library" and my current CDs just weren't cutting it. WRIT FM95.7 (formerly "Oldies 95.7") and WKLH FM96.5 are the only two radio stations in the metropolitan area that consistently play mostly what we would call "classic hits" (50s, 60s, 70s, 80s). Even then, they tend to play a lot of overrated music, and besides, every now and then a guy gets tired of commercials. That's when CDs hit the spot (or vinyl, whatever floats your boat). I did an extensive survey of all the music in my playlists and careful, through 2 rounds of elimination, selected only the highest quality hits that I felt were worthing of getting burned. I had originally planned on 2 discs. Well, two turned into three, three into four, four into five, five into five plus three more discs just with Beatles music. What can I say? There was a lot of good music from that era.

Once I had all the music picked and burned, I headed to Excel to create a track listing I could print out and post on the wall for reference. I included the Name, Track No., Artist, Album Name, and Length, but I also included the Year of Release for fun. I often wonder when a song was released, and the release year is often very telling of what a song is like, and vice versa.

Well, something strange happened when instead of sorting the list by Track Number, I sorted it by Year. Take a look below:

Note that I removed the Disc and Track No. columns for readability (also the 3 Beatles discs are not included, though they — of course — contain many of the best songs). 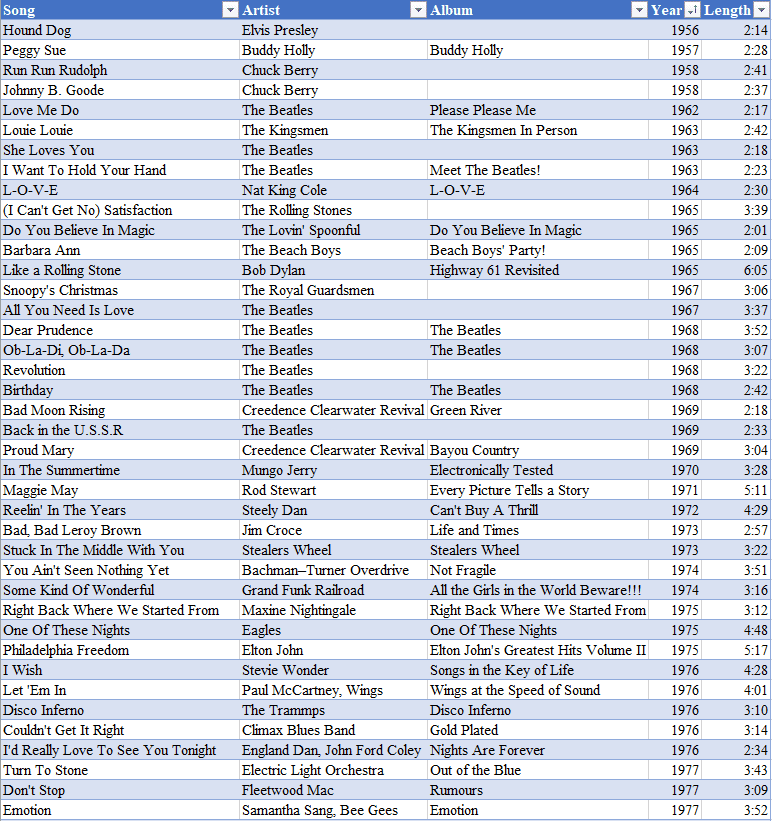 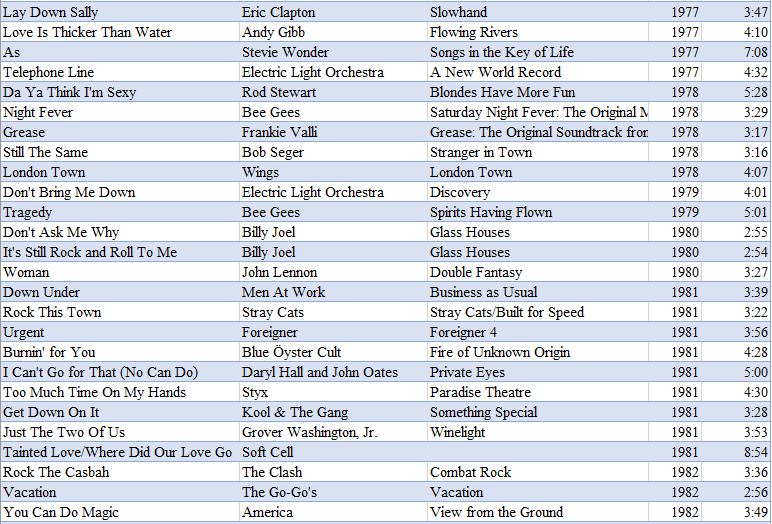 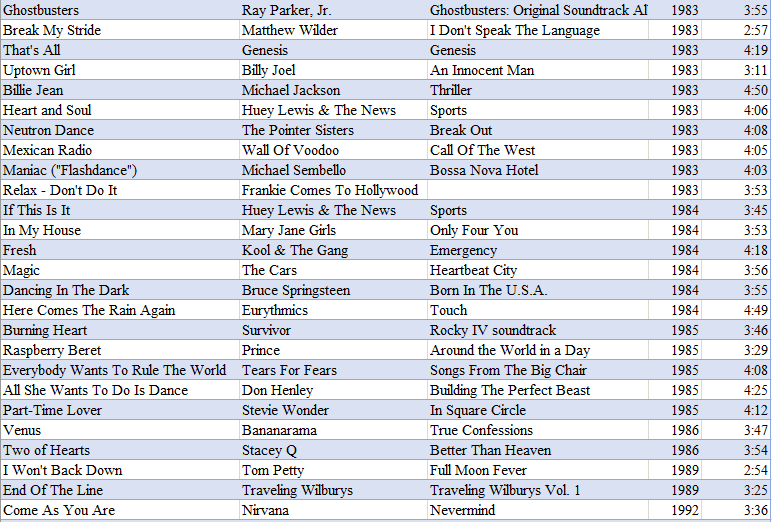 Do you notice anything strange?

Well, you might have looked at "Length" and noticed that as the 20th century progressed, songs got longer. Surprise. (Though I think Don McLean's "American Pie" is a noteworthy exception to the trend.)

But let's dig deeper. Look at the "Year" column and follow it down. First, as far as "decades" in music go, the most encompassing range of 10 years is 1974 to 1984, which encompasses most of the songs that I burned. The highest 5-year density of music is from 1977 to 1982, five years that saw many of the hits we still hear on the radio frequently today (well, if you listen to the right station). But continue following the list down. Notice anything strange about the range of these years?

Now, all this music was carefully selected by... me. I'm not a professional critically acclaimed music critic, and I don't pretend to be. The songs listed are mostly personal favorites. Everyone has different musical tastes, although some may believe theirs is more refined. That may as well be acknowledged now. Further, we like what we listen to. If we don't listen to it, we have no way of knowing we would like it. A lot of hits of the 1950s and 1960s are no longer played on the radio in the area, which means the opportunity to passively discover music from that era has passed. That's why there's only a hit or two here and there at the top, and none from Elvis Presley.

In general, however, the music listed above encompassed the better part of half a century. If you look at the titles, you'll likely recognize some, probably most, of the songs. Furthermore, I would like iterate that I did not examine the years until after all the songs had been picked out and I happened to sort by that column. I was as surprised by what I saw then, and I still am now, given that I didn't deliberately pick songs from certain years.

So what's this I'm taking about?

But there are bound to be exceptions, and so we'll just ignore that. Other than that particular song, this list of "favorites" comes straight to a dead halt in 1986.

Again, all subjective, but if you survey your own musical tastes (given that you're well listened to music from the Golden Years) you'll probably come to a similar finding.

Coincidence? Again, I think not. The last year to go unrepresented in this list was 1966. Then the gap from 1959 through 1961. Again, years that I'm not as familiar with as I'd like to be, mostly because of how mediocre most radio stations have become.

So, what are the chances that all of a sudden 3 years of the decade go by without any music? And right in the middle of the "'80s", the decade everyone loves to love?

For one, this is one of the big problems I have with people saying the '80s were the best decade for music. Come on, almost half the decade is virtually unrepresented here. Compare that to the 1970s, which had at least one hit every one of its years.

We can solve this problem by refusing to categorize decades starting with years ending in 0. I have no issue with saying 1974 through 1984 was a great decade in music. It was. But that's a little unconventional and besides the point now.

The point your attention should be drawn to is the cliff that appeared in 1986: only two hits released that year, and basically none after that. "Come As You Are" has a completely differently style, in any case, so it doesn't really mess up the picture. How can it be that music changed so quickly? Since I consider most of these songs to be classic hits, is that the year where we draw the line? Or did something deeper happen? Maybe, was 1986 the year the music died?

All the evidence so far points to exactly that. Considering that I did nothing to deliberately pick music from certain years, and just happened to not like much of anything released after 1986, it's worth taking a look at.

One possibility is the evolution of rap, which dramatically changed the music landscape. Like many people, I have a strong aversion for rap music, so certainly, that may be part of it. I doubt it's the full picture though.

Let's take a look at movies, now. Here are the release years of my favorite movies:

The trend is not as obvious here. 1971 stands out as a very successful year in Hollywood (I don't know if it actually was, but it would have been if everyone back then was like me now). If you want to see what the titles are, click on the "About Author" link underneath the title at the top of this post. Again, you'll probably recognize many of the titles. They're all incredibly famous and successful movies (well, mostly). But let's look at the years again. Three titles released after 1986. Not so bad, perhaps. That means nothing died in 1986, right?

It's arguable that music changes more quickly than movies do. But an extra decade of good movies seems to defy even the logic we have left. Maybe not, however. Take note that, again, these are personal favorites, and 3 pictures released after 1986 isn't a particularly large number. And, nothing against those three movies, either, but my absolute personal favorites are all before 1986.

The short and long of it is I don't have a definite answer to what happened in 1986 to cause the music and movie industries to derail. It's just an interesting observation I've taken note of. Many people, of course, have noted that today's music lacks the deepness, quality, merit, and "feel" of the music from yesteryear (or rather, yestercentury). Perhaps this was part of the alleged "evolution" of music and movies. They say that nothing good lasts forever. Perhaps that's exactly what happened. We had experienced enough great hits and movies, and it was time to move on. 1986 may have been the year that ushered in that revolution. What do you think?